Posted on October 6, 2016 by symbibiological 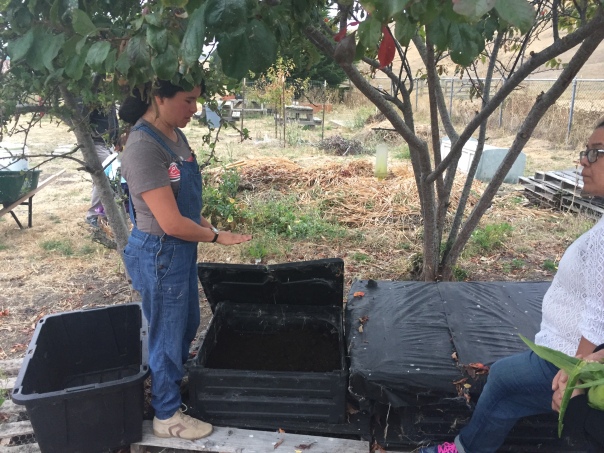 Last week, I got to participate in a composting workshop at Pescadero Elementary School sponsored by the San Mateo County Office of Sustainability and Puente, which is a fantastic local organization that believes “every member of our community deserves opportunities to learn and grow.” They are a tremendous partner to our local region providing educational workshops and health fairs to an area that doesn’t have a lot of services typical of most communities. We’re pretty rural with the coast on one side and the Santa Cruz Mountains on the other. Puente helps residents fill in the gaps where needed.

For the vermiculture portion of the workshop, our friend Mona Urbina from Pie Ranch who happens to be the Garden Coordinator for the school, reached out to see if I might have some extra worms. The great thing about a wormery that stays 70F all the time is that the population doubles in about 30-40 days. So of course, we had plenty of worms for the school!

For the “new” bins, they are essentially a small 3×3 raised bed with wire mesh on the

bottom to prevent critters from sneaking in to raid the feedstock or gobble up our worms. For the frames, Mona found some old compost stacker units that break apart perfectly to make the raised beds. Jack Johnson would be so proud of this project because now we’re hitting the three R’s. Reduce, Re-use, Recycle! Reduce, Re-use, Recycle!

The best way to start a worm bin is to stock it with around a half a pound to a pound of worms per square foot, which is 500-1000 worms/sq ft. Having this population density ensures that the worms will encounter each other regularly enough to procreate at close to optimal rates when the temperature is consistent. These bins are outside, so the temp will fluctuate a bit and we will have to be careful with feedstock additions as the worms get settled. I probably should have brought them some extras winter coats, too. Currently, the bins are under some shade since it’s been kind of warm lately. As we move further into Autumn, soon we will move them out into the sun so they can get some warmth from the solar gain and balance out the temp from the cooler nights. I will be experimenting with something outside like this as well, since our wormery is going to move from it’s current location. I remember when I first picked up our worms, Jack Chambers of Sonoma Valley Worm Farms had many of his bins outside with a little canopy over each reactor (bin) to protect the worms from direct sun. His climate gets warmer temps than we do so I think the temp balances itself out from day to night maybe around 65-70F. I think we will give it shot outside here in our region so we can provide the right advice to the local community and you, our readers! If we need a little extra heat, there are creative ways to warm them up.

One thing I’ve learned over the years is, kids love worms and insects.