Posted on February 17, 2017 by symbibiological 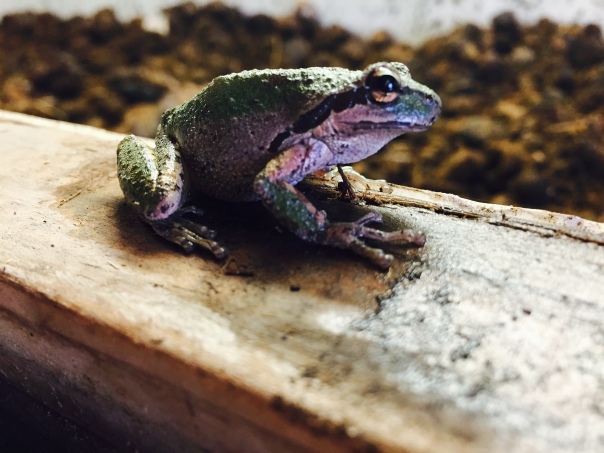 Last year, I started to notice an increase in Pacific Tree Frogs in the Wormery. At first, they were cute, but I did notice that my integrated pest management team of spiders and other critters of the worm bin were slowly disappearing. Back when I started the worm bin, we had a diverse group of insects and invertebrates. So many that it compelled me to make a video called Critters of the Worm Bin where you see all of the major players in a worm bin from a worm’s eye view at 10x and 15x magnification. Filming a pill bug eating a worm is still one of the coolest things I’ve ever seen.

Then about a year ago, it became obvious that making that film again would be next to impossible since most of the critters starring in their roles had disappeared. I don’t think they were on strike. They were gobbled up actually. Slowly, the frogs were beginning to take over the worm bin. Reluctantly, I’ve been gently relocating them outside where they belong. When I first noticed them, I figured they were eating some of the worms as I mentioned in a previous post. Upon further observation, I think they were eating a LOT of the worms! Not exactly surprising, but if you see frogs in your worm bin, I’d suggest showing them the wonderful natural habitat they already have or you’ll be raising frogs like me. And making fish food from frogs, well, I’ll leave that for someone else to try!

← Surviving Not Thriving
Measure to Manage: Nutrient Analysis #5 →
Search for: