I went to the Eating Insects Conference in Detroit and had the privilege of joining the fantastic folks at Detroit Ento for an amazing meal full of delicious insects.

Upon walking in the door, we were greeted with a meal worm infused cocktail that had me and my dinner mates buzzing about its silky sweetness as we gathered for the big meal. Apparently, when you grind up meal worms and then strain out the chitin-y bits, it adds a silky smooth texture to the simple syrup to which it is added. Yum. Had me wondering…if it’s so good in a cocktail, the home brewer in me is thinking a larval lager might be worth a try.

After the drink gave us some wings, a good look at the menu had us chirping like crickets. We could all sense the dinner was about to jumpstart our hedonistic plunge into entomophagy. Everyone was anticipating the delicious 5 course dinner we were about to share with 30 strangers that you just knew would instantly become friends after this. It felt like good ol’ family fun sitting around the table sharing stories and not one person was grossed out as far as I could tell. I guess if you come to a dinner showcasing insects as food, you kind of have the gross thing already dealt with in your mind.

After being seated family style, we were served a salad 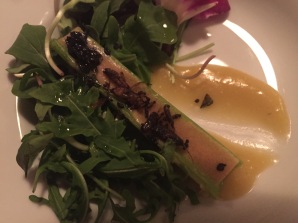 that included mushroom dirt, arugula, pea shoots, citrus-wild ramp dressing, ant eggs, and a celery stalk with a miso peanut butter gel that had montenegro soaked crickets perched atop it like the traditional ants on a log you make with peanut butter and raisins on celery. Very tasty.

The 2nd course was a panko/cricket and ant larvae crusted mealworm and sago worm arancini on a mealworm and cricket risotto with oregano oil. The mealworms were like a wild rice grain in the risotto. Pretty cool how they worked together.

If you didn’t look at your food, you’d have no idea there were insects in there. Yet, there they were! Texture seems to be the main fear when considering insects as food. It really just tastes and feels like food. Kind of hard to tell there are
bugs in your mouth to be honest. One of the guys from Detroit Ento said most people fear you might have to pick a cricket leg out of your teeth or, worse yet, something might be squishy and burst a juicy squirt of bug juice in your mouth. Not so. Everything tasted and felt like any normal food and thank goodness for that. I don’t think I could handle a bug juice squirt. I don’t care if it tasted like ambrosia.

When the soup came out as the 3rd course, it started to remind me of that one scene in Indiana Jones. Kin

d of hard to hide whole insects that are very obviously floating around in your soup. Not that they were hidden in the previous dishes, but when they’re floating around? I took some time to pause and regroup. After all, I had just drawn the line at juicy and here I was staring at a bowl of it. You know, that larval lager idea was starting to sound really good to me at this time.

The soup had a Thai influence with meal worms, silk worms, wild rice, red pepper, red curry and coconut milk. Well, my hesitation was for not. That soup was unbelievable. I particularly liked the larger, much buggier looking silk worms for both flavor and texture. And they were the ones I kept looking at thinking I might push them to the side. Glad I didn’t because at this point, I had graduated to full on entomophagist. Bring on the bugs! 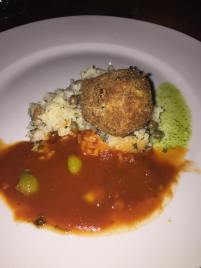 The 4th course was an exciting entomological entree that included silkworm and mealworm mofongo on rice and peas with a smooth buggy sofrito and cilantro oil.
Quite frankly, I was thrilled to see those silk worms back on my
plate and this concoction was one of my favorites from the evening. I was
getting sad that we were almost finished.

And for desert, a nice piece of chocolate cake with cayenne, 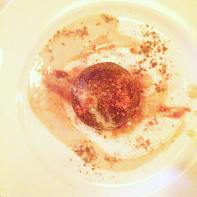 What an evening! As a micro rancher, I’ll admit I’ve been hesitant to try any of my harvests stockpiling protein to make the fish food. After today, I look at the harvests a little differently now. Particularly, those meal worms. They’re pretty dang tasty! And silk worms, who knew? Well, apparently a whole bunch of people all over the world!

Eating insects, or entomophagy, isn’t going to be for everyone. It’s a tough gig to try and get over the fact you’re eating something that you would typically step on, but a couple crunches in, you might agree. Or you might not and that’s okay. One thing we really should consider, though, is feeding them to fish and poultry. Insects are an important component of the natural food chain. Incorporating insects into feed helps mimic the natural diet of both fish and poultry. Currently, insects are not recognized on the GRAS (generally recognized as safe) list and this needs to change. Insect farming requires less energy and feed inputs to produce high grade protein that has the potential to improve animal performance, reduce input costs, and help the environment.

Please reach out to the USDA and your local politicians to make a change allowing insects as feed and join the North American Edible Insect Coalition when you get a chance.