Two crickets get a drink together

Last winter, I posted about how my pitiful cricket yields were starting to climb. I went from 4 ounces to 8 ounces and it was rather encouraging. Then, my yields tapered off and I was back to getting 4 ounces. Absolutely devastating to be going backwards. Well, the yields have finally jumped back up to 11 ounces per bin the last 15 or so harvests. It seems to be getting better because my last 6 harvests have averaged 21 ounces per bin!

I’ve got a couple posts on the blog that talk about cricket dehydration and that it was likely my problem in a few die offs in some of the bins. It seems silly to me now, but water is really important! Like really, really important! Knowing how the environment behaves in the enclosure can go a long way. The lesson I learned was that in California, when it rains, especially heavy rains and we had a lot of those this winter, the air gets very dry afterward. The winds blow hard for a couple days. The sunshine shines it’s golden rays and the grass grows green and lush. What also happens is the dry air sucks the moisture out of the mud pies at a much faster rate than I was prepared for. So on some days, things would be fine, and others, not so fine. I just didn’t understand the correlation until recently. A full six months later! I’m real quick, huh? In my defense, it does take a couple 8 week cycles to dial things in when making adjustments.

The adjustments I made were keeping an extra mud pie in each bin and adding rock wool cubes from the aquaponics greenhouse. 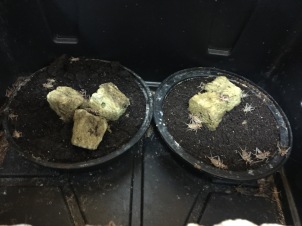 Sometimes seeds don’t germinate and I have some extra rock wool cubes leftover from a planting. I’ve been saving them for some use somewhere in the Symbi system and found they work great as cricket watering stations. One mudpie for laying eggs and one for a secondary water source, if the cubes dry out. The “mudpie” consists of one part worm castings to 5 parts coconut coir. The crickets lay tons of eggs in there and I believe the microbes in the worm castings give the cricket larvae a nice smorgasbord to graze upon while growing big enough to get to the food outside the tray.

My original set up consisted of one mudpie that was used for both watering and egg laying. This worked, but the issue was if I wanted to provide extra water, I would end up drowning the eggs by making the “mud” soupy. I eventually progressed to using poultry watering fountains, but found that our well water gets pretty funky smelling when sitting stagnant.

They didn’t seem to like that very much. I also didn’t account for the extra humidity created by the open water in the enclosed bin. Low air exchange and high humidity led to some die offs. The ammonia smell was pretty strong telling me that I was doing something wrong. So I pulled out the poultry watering and went with an extra mud pie and the rock wool cubes. This isn’t the ideal watering system, but it works. There are certainly better ways and I will share them as we try them out. I’m thinking of an automated drip system. Maybe take a drip irrigation system and modify it with a cycle timer to release just a few drops every so often so that it is controlled. I’ll let you know how that goes when we get it set up!